Showing posts from May, 2009
Show all

May 31, 2009
Friday night we stayed up really late having one final blow-out party with our good friends Theric and Lady Steed. We were both pretty wasted yesterday, Mr. Fob especially since he needs more sleep to function correctly. But he still deep cleaned the house yesterday, including the bathrooms, the windows, and all the floors. And he's been taking care of the arrangements for utilities for our new house and scavenging dumpsters for boxes to start packing. Plus today I got several complements on S-Boogie's cute hairstyle that I had to deflect back to him and his artistic skills. The reason why we were up so late partying on Friday (not just our impending move) was the release of The Fob Bible , a collection of writings by members of Mr. Fob's writing group. I was impressed looking through the book at the variety of things in there and their quality. I've also been impressed by Mr. Fob's devotion to the craft of writing and the great friendships he's maintained alon
5 comments
Read more

Signing away a year of our lives

May 28, 2009
We just signed a lease on a house in Orem . It has many of the things we would like to have in a home: a yard, a garage, three bedrooms, central air, and a great location close to an elementary school and park. It has a few things we didn't really want, like an occupied basement apartment and no dishwasher. We also haven't seen any pictures of it; Mr. Fob's sister agrees with the landlord in warning us that the kitchen is small and old. Nice kitchen was lower on our list than garage and neighborhood, so we ended up compromising. And this is the third time in a row that we've moved into a place without seeing it first. We wanted to do things differently but keep reminding ourselves that we're too poor to have the ideal life we'd like to have, and this really is the cheapest and most convenient way to move. Hopefully I won't regret this, but I'm looking forward to seeing it in just two weeks. At least we're only a few blocks from a pool.
6 comments
Read more

May 24, 2009
This is a post that's been rolling around in my head all week, but we've been busy and I haven't had time to write it down and post it. Now it's late and I worry that my thoughts won't be very coherent, but I still thought I'd try and write it out to see what I come up with. The title of this post was inspired by a few things I've read recently on blogs by a variety of people. One poster works with the young women in her ward and has been troubled by their lack of ambition. They don't seem to have solid plans for their future and don't feel a lot of motivation to get educations or to even plan for much besides motherhood. Another post was on Segullah, discussing the importance of education for woman as a component of provident living. A third source was this article from the New York Times that discusses vocational education and manual labor, as well as the role that our chosen careers can play in determining our character and the quality of our li
8 comments
Read more

May 18, 2009
I had a good day today, and I think it went well because I got up and went to the gym for the first time in a few weeks. I only walked on the treadmill because I was feeling out of shape, but it was still a good way to start the day. It was a little weird because the counselors in my bishopric were at the gym working out this morning too. That's the funny thing with being in a student ward; last quarter I had a class with my home teacher. This morning I had to go to the Verizon store to get a new battery for my phone. It was a surprisingly painless experience; I had worried that the salesperson would pressure me too much to upgrade, but he didn't at all. I do have to say that he has a job I would never want to have. There were five salespeople all sitting around this little store in a strip mall just waiting for someone to want to buy a phone. I think that would make me want to scream. I also went to Walmart this morning. I almost never shop there anymore; partly for philos
7 comments
Read more

The Ear Saga and the Terrible Threes

May 16, 2009
Pretty much every doctor who has taken a look in S-Boogie's ears has done the same thing: try to look in, exclaim "you have tiny ears!", and then choose a smaller otoscope attachment. Thankfully her tiny ear canals have really not caused her very many problems in the past, other than a copious amount of wax that we occasionally have to get flushed out by the doctor. When we did that last fall, the doctor told us about some drops we could buy at the store that would dissolve the wax, so I bought some and used them a few weeks ago. Well, I don't know if it's related or not, but then a little over a week later (nearly two weeks ago), S-Boogie started complaining that her ear hurt. We let it go for a day or so, and then when she was still complaining we took her in to the doctor. There was no fever, so I was surprised to find out that she had an ear infection. Thankfully we got antibiotics and after two days of major pain the infection seemed to be clearing up. Unti
5 comments
Read more

May 11, 2009
This morning I had a meeting for an interdisciplinary conference I'm participating in on Friday. One of my colleagues is an anthropology student and is presenting a paper on the use of cars in China. She brought up a term that is often used in anthropology and cultural studies when talking about the study of people and their interactions with cars: automobility. I thought this was an interesting term, and the things she had to say about the impact of rising car ownership rates on China were fascinating. It got me thinking about cars and their impact on my own life. I didn't own a car for my first three years of college; I just walked or biked to where I needed to go, and often ran errands with roommates or friends that had cars. Generally my life was pretty simple and I didn't have much need for a car. When Mr. Fob and I were dating, he got a car so we've had one for our entire married life. During those years we've gone through various stages of car usage. I will
6 comments
Read more

May 10, 2009
I admit that I hold back on a lot of things on my blog for fear of offending people. I tend to overshare some things on my blog, but generally avoid making the kind of snarky judgements that other people can get away with on theirs. In real life I'm actually fairly judgemental but usually keep it to myself or complain to my husband when no one is listening. There's one issue that I know everyone is opinionated about and I've been scared to say anything for fear of offending: baby names. What is up with the things some people name their kids? The Social Security Administration just released their list of popular names from 2008, and the website is an awesome place to waste your time. I will refrain from sharing too many of my opinions, but there are a few issues I really want to complain about. I randomly looked up a few states to compare their most popular names and was not surprised by the results (for example, Angel is the number 3 name in California). What I didn't
15 comments
Read more

Is it Thursday already?

May 07, 2009
The weeks are flying by; I just realized the other day that we only have about six more weeks until we go to Utah. In my mind I keep thinking of it as a vacation and not a move, especially since we don't have firm plans on where we're going to live or anything like that. I'm also not stressing myself to death over this move. I guess I've finally learned my lesson from the last few times. It also helps to be moving somewhere that we can actually afford to live and where we can pick out our new place and see it before committing ourselves to live there. I had good intentions of getting back on track with a lot of things this week, but my groove got thrown off. S-Boogie has had an ear infection since Monday afternoon, and even though we started antibiotics for her she's still been in a lot of pain and waking up at night. At least we made it through most of the last year without any major illness for either child. I'm already crossing my fingers that they will sta
6 comments
Read more 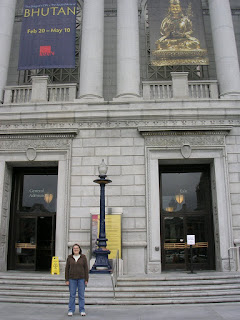 This was supposed a cool picture of me and Mr. Fob riding across the Golden Gate bridge on a tandem bike. Instead, it's a photo of me in front of the Asian Art museum. The museum was pretty interesting, but we couldn't take photos inside and so this is what you get. Unfortunately the cold and rain ruined our plans to do something slightly out of the ordinary, so we settled for Gyro King and an art museum . And of course the entertaining ride on BART under the bay. It was good birthday and I want to thank everyone who wished me well, and especially our good friends the Thteed family for watching our kids for several hours so we could go gallivanting around like childless people. They even bought me a birthday cake as a surprise; of course S-Boogie had to choose the enormous chocolate one with "Happy Cinco de Mayo" written on it. I've never had a Cinco de Mayo cake before, but it went well with the massively meaty pizza to create a birthday dinner that none of us
4 comments
Read more
More posts