Showing posts from May, 2012
Show all

May 29, 2012
Yesterday was Little Dude's birthday and I think he had a great time. As usual, I spent several days preparing for the party. And, as usual, I think it was worth it. It is a lot of work to make food, clean things, and decorate a cake. But, it's the kind of work I like spending my time on because I cherish being able to spend time with people I love, and the way I show them I care about them is by doing things for them. I also spent a lot of time trying to convince Little Dude that he didn't need an Angry Birds cake. Then I got over myself and made him a round cake that looked like a red Angry Bird. For his birthday he got a lot of presents that had either Batman or Angry Birds on them. He was so happy that I realized that it really doesn't matter that much in the end that he likes so many commercial products. We still don't watch a lot of TV and he's not obsessed with any one thing over others. I think I'm just a bit of a snob. This weekend my parents ca
1 comment
Read more

May 20, 2012
I've been working at my new job for two weeks and I've been meaning to write about it for at least a week. The truth is, I've had the time, I just haven't taken it. I've been trying to readjust my thinking and speaking to reflect the fact that most of the time when we say "I don't have the time for that", what we're really meaning is "I haven't made it a priority." Apparently wasting at least an hour each evening on reading internet articles is a priority of mine. I think I need to make some adjustments, because other things really should be on the top of my list. People keep asking how my new job is going, and the truth is that at this point it's hard to tell. I always have a hard time getting used to new things and new situations. It's not that I dislike my new job, not at all (and things like this are why I hesitate to write about my employment on the internet). In fact, the people I work with are great and I love my new
1 comment
Read more

May 13, 2012
Rearview Mirror by Stephanie Black I think I might have liked this book more if I had not been reading it in the middle of the Whitney crunch. I was trying to read it too quickly and I should have slowed down a bit. It was well-written and deserving of the Whitney award that it won, but it didn't make me want to read anything else by Black. Gifted by Karey White I kept putting this book down for a while and then coming back to it. The way it was written made it hard to read; it felt like reading someone's personal journal, but in a boring way and not one that brought out any sense of personality. It was a first-person narrative, but rather than reading like a novel unfolding as the protagonist tells us the story, it read like a rather boring chronology or life history. I also think that I am not the target audience for this book, because I felt like I was missing something. I wasn't entirely sure what the point of the book was or what message the author was trying to
Post a Comment
Read more 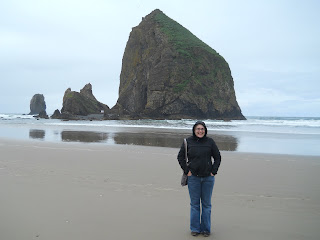 There aren't any kids in these pictures so I can put them on my blog. I don't think I've put pictures on here for years. This year I decided to go on a trip for my birthday. I got some extra money from my tax return, and I just wanted to go do something different. I went up to Oregon because my sister lives in Portland. I flew up Tuesday night and spent the night at her apartment. The next morning (after a stop at Voodoo Donuts for a maple bacon bar) we drove out to the coast and spent a few days there. It was a lot of fun. Our first stop on Wednesday was Cannon Beach. I love Cannon Beach; the town is small and beautiful and the beach is gorgeous. I had originally thought of staying there, but even off-season it was more expensive than I would have liked. We walked down the beach and enjoyed the scenery. It was fairly cold most of the time I was in Oregon; I knew it probably would be when I scheduled the trip, but I like the beach even when it's cold. After Cannon Be
3 comments
Read more
More posts