Showing posts from December, 2005
Show all

The spirit of the season

December 28, 2005
Last night I was putting S-Boogie in the car so we could go to Queen Zippergut's wedding reception. I explained to her that we were going to a special party because QZ had gotten married. S-Boogie repeated "got married" (at least it sounded like she did), and then she looked up and asked me "Got Joseph too?"
3 comments
Read more

Christmas day in the afternoon

Home for the Holidays

December 24, 2005
As you may have figured out, we've been hanging out at my parents' house in Las Vegas this week. This trip has been pretty exciting for me because this is the first time I've been at "home" for Christmas since 1998. My parents came out to Utah a few years ago, but I'll admit that I spent most of that vacation grumpy and nauseated from being newly pregnant. It has been a kind of weird trip, though, because my parents just moved out here and their stuff didn't arrive until this morning. So it feels like home and yet it doesn't. We're also still in this weird stage where things are adjusting to having grown up children and traditions are in flux. But, we're still having a fabulous Christmas Eve here. Most of the boxes are waiting out on the patio and won't be unpacked until later. But we got the living room unpacked today and it feels quite cozy. My dad also decided that it was time to replace their old TV and got a very large flat screen at
1 comment
Read more

December 23, 2005
Today I decided to take advantage of the beautiful weather and let S-Boogie outside to play on the nice patio attached to the back of my parents' house. I feel bad that I haven't let her out to play more often this week. The weather and the fact that we live in an apartment keep her from playing outside very often when we're at home. So my mom decided to attach the little Nerf basketball hoop to one of the posts holding up the patio roof since we figured that S-Boogie might enjoy shooting some hoops. Unfortunately, the child has never played basketball before or seen it played by anyone. She didn't understand that the point is to try and throw the ball into the basket. Instead, she wanted to be able to just drop the ball in and was angry that the basket was positioned over her head and made this impossible. I tried demonstrating a throw a few times and encouraged her to try it. She wasn't buying it. Then her eyes lit up and she ran back into the house. She came out
Post a Comment
Read more

December 21, 2005
We are currently posting from my parents' home in Las Vegas. They just moved out here after a number of years back east. Before that, we mainly lived in California, so they were trying to find a way to get back here closer to the grandkids that wasn't quite so expensive. We'll be here for a week, and then next Monday we'll go back to Utah. It's been a really fun vacation so far. The rest of my family that is coming (one brother is in Russia and the other is in Maryland) won't be here until tomorrow and Friday, so on Monday Melyngoch and TB came down with us, and then on Tuesday morning Th and Lady Steed drove up to meet up with us. We've had quite the party together, and you can view Master Fob's blog to get the full scoop on the shenanigans. Las Vegas is still not my favorite place in the world, even after seeing the full-size replica of David at Cesar's Palace and eating overpriced pastry in Paris. The last few days haven't been very rest
3 comments
Read more

December 16, 2005
Well, we got to try out the big screen ultrasound set-up sooner than I had anticipated, and it was pretty cool. Yesterday I spent most of the day on the couch resting because I was having some cramping and spotting. Today I was feeling better, but we went in for a little peek to make sure baby and everything else was OK. It was and baby looked very cute. Still a little too small to figure out the gender, but Skye offered to sneak me into labor & delivery to play with their machine, so we might do that in a few weeks. The best part is, I'm supposed to rest for the next 10 days until my appointment, which means I get out of cleaning the bathtub and vacuuming. It's a good thing I'm on vacation!
3 comments
Read more

This should make things interesting

December 13, 2005
I had my presidency meeting for Primary tonight, and it came up in conversation that I'm pregnant. Well, then both my counselors told me that they are too. One is due in May and the other in July. I'm sure the bishop will be overjoyed to hear about this...
4 comments
Read more

December 13, 2005
I have either grown a second heart in my lower abdomen, or there is a little baby in there growing away just fine. I kept my appointment with the midwives today, since Dr. Judd can't see me until the 27th. They checked me out and everything looks and sounds fine. My uterus is measuring bigger than it should, but that's not surprising given the state of my anatomy. I also signed the little forms that give them permission to transfer my records over to the doctor's office. That made me feel a little sad. But then the nurse told me that Dr. Judd has an ultrasound machine that is hooked up to a large-screen plasma TV. That sounds somewhat exciting.
5 comments
Read more

December 11, 2005
Over the last few years, I have suddenly become aware that there are gay people in the world (if anyone here also reads Master Fob's blog, you will know why). I honestly don't remember thinking much about gay people during high school or even my first few years at school before my mission. I went to high school back when it wasn't that cool to admit to being gay, and most people at my school were members of ethnic groups that still don't think it's very cool to be gay (don't mean to be racist, but it's still mostly OK to be white and gay, but not Samoan and gay). So yeah, didn't think about it, and I honestly didn't care that much. But, now that it's become more of a personal issue for me, I have to confess that I spend way too much time lately fixing up my "gaydar" and trying to figure out who just might be hiding something. Especially since I live in an environment where very few people are out and most are hiding way in the back of
9 comments
Read more

December 09, 2005
Every semester I start out thinking that I'm going to stay on top of my work and start my research papers early. And every semester I wake up one morning a week before classes end and start hyperventilating because I still have to research and write several papers. Once again, I have shown just what a true procrastinator I am. I have two papers due Monday morning. They are both supposed to be about 12 pages long. Paper One is nearly complete--I have eight pages written and hope to finish it tonight. It's not going that well, but I'm banking on the fact that the professor likes me and is usually a nice grader. Paper Two has not been started. At all. I've been putting it off because I'm scared of it. In theory, I have all day tomorrow to work on. In practice, I'll probably be up really late Sunday night finishing it. Someone please shoot me now.
4 comments
Read more

100 things you didn't know about me 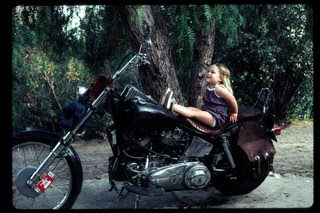 I was going to post something else, and then I realized that I was at post number 100. So I thought I'd make it special. And, since pictures are worth at least 1000 words, this actually adds up to more than 100 things: I was a biker chick in a previous lifetime. Even though I object to Barbie and don't want S-Boogie to play with them, I did and I turned out all right. Also, I don't know why I am wearing boy pajamas at my birthday party. I totally loved my pink bike with the banana seat and I was very sad when it got left in the driveway and run over by a car. And I thought that rainbow suspenders looked really cool with my bright pink pants. When I was in first grade, my teacher had some pet rats in the classroom. One day, they had babies. We could take one home if our parents said yes, so I got my dad to agree to it. This is me and Ratty with our first "Rat Day" cake. Every year for many years thereafter we would celebrate the anniversary of my first cak
8 comments
Read more

December 01, 2005
One of the semi-profound lessons I have learned during the last few years is that life will never go the way I want it to, and it always takes me a while to adjust to this fact. Before I left on my mission I still assumed that I wouldn't get married and would simply graduate and go off somewhere fun (and near the beach) for grad school and such. I also made fun of people who married someone they had known as missionaries. So then I married a fellow missionary a little less than a year after we both came home. I also planned on getting out of Utah as soon as I could, but it's taking a little longer than I had originally planned on. And then I thought that we would wait a while before having kids, and "a while" was not as long as I'd originally planned. The thing is, I'm totally, completely happy with my life as it is right now. I don't know how I would feel if my original "plan" had all worked out. Who knows. I've tried not planning on things,
6 comments
Read more
More posts